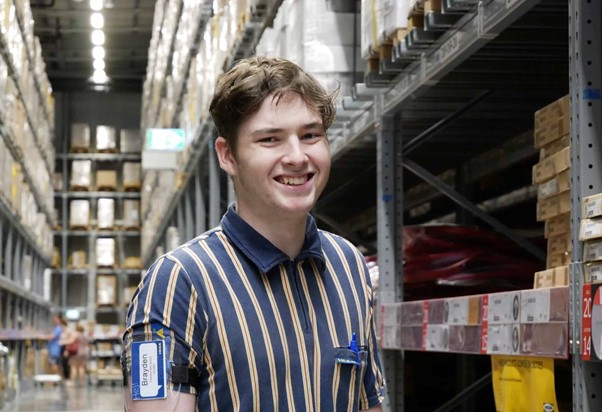 EPIC Assist (EPIC), an accredited Ticket to Work partner, is preparing people with disability for the workforce and supporting them to reach their potential. We recently chatted to Brayden, a young man on the autism spectrum who has been studying Retail.

Brayden has been completing the work experience component of his Certificate II in Retail Services at IKEA, North Lakes. The Team Leader, Jess, says she’s seen real improvements in Brayden’s initiative and willingness to solve problems on his own.

“He’s been really good. He has definitely improved. Instead of coming up to us now and asking, ‘What do you need me to do?’, he will generally just go onto the floor, do a walk of the aisles, and just know what to do,” says Jess.

“He’s also shown he is excellent at receiving constructive feedback. He takes feedback openly, which is something you don’t always see. We were really pleased with that.”

Brayden advises others thinking of starting a traineeship to give it their all, and resist the urge to cruise by at the bare minimum.

“It’s hard work – you have to put in effort, which I do now. At the start I didn’t really put in much effort, but now I put in a lot of effort,” says Brayden.

Brayden hopes to use his traineeship with EPIC as a stepping stone to gain transferrable skills that will support his eventual goal of joining the Police Dog Squad. Jess says it is incredible the range of experiences Brayden will have under his belt in just one year.

“When Brayden finishes his traineeship at IKEA with EPIC, he will have so much experience with customers and working with people,” says Jess.

“It gives him that step forward in his career, because everyone is looking for a career. It’s no different for people with disability.”