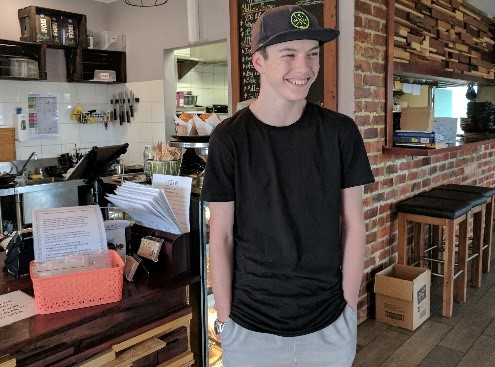 Kyal is a 19 year old dog biscuit Entrepreneur with autism and ADHD. He started out by making healthy treats for the family husky Apollo, which soon turned into a successful business with thousands of happy furry customers.

Kyal began his micro-business ‘Kyal’s Doggy Delights’ when he was 16, he participated in the School to Work transition pilot in Western Australia through Rocky Bay disability service, funded by the NDIA. The Rocky Bay staff were trained and mentored to use Customised Employment techniques. This approach tailors the unique abilities of the person to match the needs of the business, or in Kyal’s case using his cooking skills to create his own business. “I have autism and ADHD and cooking is relaxing and fun for me” said Kyal.

Customised Employment has four essential components, Discovery, Job Search Planning, Job Development and Negotiation and Post-Employment Support. During the Discovery Phase, it was determined that Kyal prefers hands-on practical activities. He is a meticulous worker and does everything to a high standard.

The Rocky Bay staff worked with Kyal through the Discovery process and discovered his interest to combine cooking with and his love of animals.

Steve, owner of Bolt Coffee was happy to give Kyal’s biscuits a one week trial. Kyal delivered a sample batch and every single biscuit sold. Bolt Coffee soon became the first stockist, followed by the family’s dog groomer ‘Puppy Love’ and many others followed suit. Some local businesses that sell Kyal’s cookies by the jar include Syd and Phyllis, Cafe Mojo, Urban Grind on Royal and The Organic Circle. There is also larger stockists that sell by the bag, including the Garden Café, The Robot Bun Factory, Mr Bones and Canine Unleashed Doggy Day care.

Kyal is currently making more than 2,000 biscuits a week, including hemp biscuits’ as well as ‘pupcakes’ and Doggy Breath Mints, all made by hand. Canine Unleashed Doggy Day care is one of Kyal’s largest suppliers when it comes to birthday cakes for dogs. There is at least 1 order per month for a pupcake from the day care clients.

Kyal continually modifies his recipe, so that he gets the best possible taste for his canine customers. He now has 12 flavors available and he caterers for many dog dietary needs of dogs, including grain free, gluten free, egg free, vegan and vegetarian biscuits. His hemp biscuits’ provide many benefits for dogs, including reducing anxiety, barking and hip problems.

Kyal has used social media to grow his business through the Facebook page @kyalsDoggyDelights and Instagram @kyalsdoggydelights and he is in the process of building a website.

The business is a family affair, Kyal’s twin brother Benji has designed the branding. As Kyal has taken over the family kitchen, Kyal and his family are in the process of building a kitchen in the back yard. It is getting close to completion. Kyal was the 2018 inaugural Microenterprise Grantee for One2One, so he has purchased ovens and commercial equipment for the new kitchen.

“I am so proud of Kyal and this has made him feel worthwhile and shows what he can achieve.”

Kyal says the best part about his job making dogs and their owners happy.

Kyal’s business remains strong even throughout COVID-19 economic downturn, he has continued to receive orders through his Facebook page, Instagram and word of mouth.