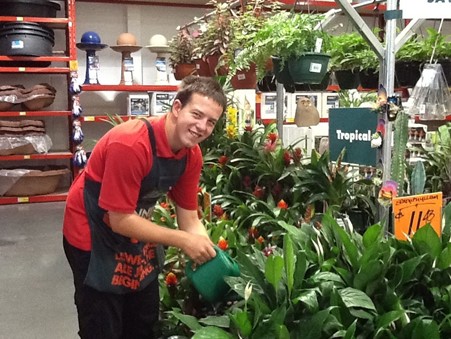 Since starting his career at Bunnings five years ago, Oliver has become a valued long-standing member of the Bunnings team. While in his final years of school Oliver was offered the opportunity to improve his employability skills and work towards his employment goals through Ticket to Work, a national initiative that supports young people with disability to transition from school to open employment.

Oliver has an intellectual disability and motor dyspraxia so he was offered the support of a number of organisations through the Ticket to Work network in order to build his skills whilst in a supportive environment. Oliver completed some work experience in retail and decided that this was an area he would like to pursue.

As Bunnings had not employed a young person with disability before, Marriott provided staff with disability awareness training with customised skills and knowledge so that they could work alongside and supervise Oliver with confidence. Marriott also worked with Oliver to build his on-the-job confidence.

Former Employment Manager Samantha said, “We originally placed him there, just two days a week stocking shelves. He required a lot of support at the beginning to develop his confidence. He needed support with his customer service skills so we had to focus on those, for example being out there and helping him to speak to customers when they were looking for something.”

During his Traineeship Oliver was a very productive member of the team.  Oliver moved through a number of departments which enabled him to develop knowledge and skills in each area. Bunnings were impressed with Oliver's work and offered him a permanent part time employment after he completed his Traineeship. Oliver works between 20 and 30 hours per week and has been provided with additional training in landscaping so he can continue to grow his skills. Oliver’s hard work paid off and he has been presented with three customer service awards for excellence as a testament to his skills.

Ms Pine described the enormous gains made by Ticket to Work participants as a benefit of working with such a young age group.

“Initially we provided Oliver with intensive on-the-job support. As time progressed and Oliver developed in his role we began to scale back our support, and eventually it got to ‘flexible’, meaning on an as-needs basis. Over time he became more confident so they moved him into the plant section and increased his hours.”

Despite never having employed a trainee with disability before, Bunnings management and staff felt well supported to work with Oliver through assistance provided by Marriott and other members of the Ticket to Work network.

“Ticket to Work has worked for our business because they were able to match us with a student that was interested in our workplace,” said store manager Andrew.

“We also got lots of support from Ticket to Work partners so that we could ensure Oliver received all the assistance he needed at work.  Because of this Oliver has grown to be a really valuable member of the team and we were thrilled when he agreed to continue working with us after finishing his Traineeship.”

Ms Pine emphasizes the importance of developing relationships with employers who believe in the young people and the valuable contributions they can make.

“When he got offered a permanent position there we offered them supported wage (reduced wage costs) to ease the transition, and they refused because they wanted to pay him full award. This shows how much they valued Oliver and thought of him as much a part of the team as any other staff member.”

She also comments on the satisfaction of witnessing Oliver's personal and professional growth.

“It is amazing to see the development of Oliver though his employment from a shy and uncertain student to a confident young man who can work with customers and take on responsibility.”

Ms Pine also recognises the business case for DES membership of Ticket to Work: the opportunity to build relationships early in the young people’s careers.

“For the parents and young people, knowing that a DES provider will be there when they finish school is really beneficial. Knowing that when the time comes, they already have a trusting relationship with a DES who understands their needs. For a DES provider, that results in good outcomes.”

Oliver is thrilled with his job and his level of independence. He recalls his school, his managers and Marriott as key supports in his transition from school to work. Oliver is also a very strong advocate for Ticket to Work saying “I would tell students and parents that School based Traineeships can be really fun, interesting and they shouldn’t be nervous about them – if I could get to all schools and tell them about them I would.”