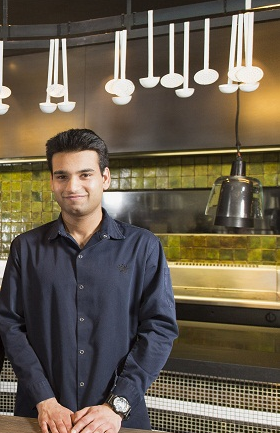 Nomaan’s journey from school to work

Nomaan is a 21 year old kitchen steward at Melbourne’s Crown Casino and an aspiring actor. A former student at Berendale School, Nomaan became a participant in Ticket to Work during school when he saw an opportunity to pursue his career interests and learn more about the world of work.

As he has autism, Ticket to Work offered Nomaan extra support to pursue his employment goals.  The Bayside and Greater Kingston (BGK) network met with Nomaan to find out about his strengths and aspirations. After identifying an interest in cars and automotive technology the network looked at how they could support him to pursue this interest.

Nomaan commenced a Certificate II in Automotive Technology with Brighton Honda while completing his final year of school. Marriot Employment Solutions, a member of the BGK Ticket to Work network, provided regular support to Nomaan and his employer to ensure that the experience was as rewarding as possible for both parties.

Nomaan enjoyed automotive technology but could see that the sector was slowing and may not be able to provide stable employment, so he made the decision to pursue other work.  After finishing school Nomaan did food and beverage work at a cafe and at Hungry Jacks.

In December 2014 with the support of Marriott, Nomaan started work at Crown Casino as a kitchen steward. He has now been with Crown for over a year and thoroughly enjoys his work, particularly the “venue jumping” aspect of his role where he rotates through the various restaurants at Crown, as he gets to experience many cuisines and kitchen environments.

Nomaan is looking for growth opportunities within Crown and is hoping to move into a Food and Beverage Attendant role as he likes the idea of serving and being around customers. He is also looking at other study and career options such as studying motor sport technology or joining the police force. At the moment he is focused on saving money to pursue his goals, as he has big plans for the future.

“I would very much like to qualify for my dream job, which is getting into the acting industry.”

Nomaan is thrilled with what he’s achieved so far and the confidence that he has built through work and training. He attributes a lot of his success to the support he received through Ticket to Work.

“Ticket to Work has really helped me, and Marriott has played a big role in my employment. I would recommend it to other students currently at Berendale. If I think about where I am today, I don’t think I could have done it without Ticket to Work. If I compare myself from 18 to 21, I’ve got so much more independence. I’ve even gone on holidays with friends. I’ve got my own personal car and finances. I couldn’t ask for a lot more at the moment.”