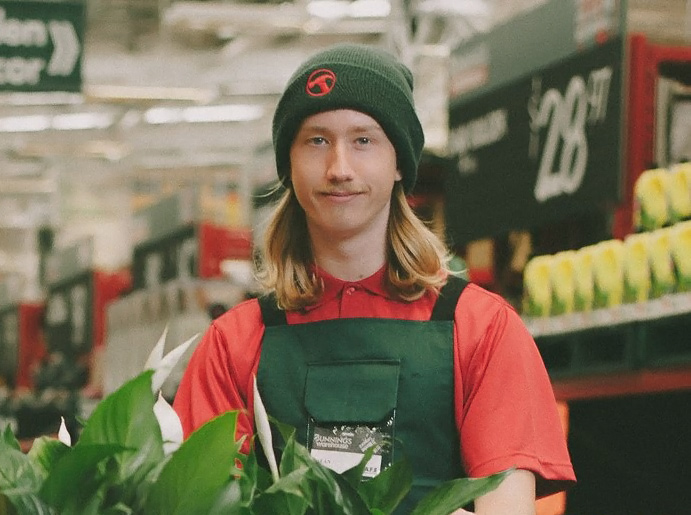 Sean is a Year 12 student at Berendale School in Moorabbin. He also just saved the Bunnings Moorabbin store from being thieved $2,500 in stock!

Sean has an intellectual disability and was supported to get his first job at Bunnings though the ‘After School Job pilot’ run by his local Ticket to Work network, with funding from the Victorian Government and the Ian Potter Foundation.

Angela from Access Australia Group, a Disability Employment Service provider (DES) was instrumental in working with Sean to support him to gain employment and provide on-the-job support. Angela worked with Sean by getting to know his goals, and engaged Bunnings to set up a work placement. Staff at Bunnings were impressed with how Sean performed during his placement and offered him a job.

“Sean is quite versatile and we can get him to cover the registers or running stock and stacking shelves,” said Sean’s manager, Kristy. “As Sean has had some hospitality training at his school, he is also able to work in the café too, which was great. He is working out really well in the role. He has had a keen willingness to learn and try new things from the beginning, which is what we look for in a team member.”

When recounting how Sean noticed an attempted theft worth thousands of dollars of stock, Kristy said Sean caught the thief in the act, informed a supervisor and saved Bunnings a whole lot of money. “Sean was very humble in the situation and told us, ‘I was just doing my job’, even though it was a really big deal for us!”

Sean either drives himself to work or catches the train. His dad is really happy that he has a part time after school job and that he loves it.

Sean has many interests, including fishing, and despite not knowing for sure what he wants for his future yet in terms of jobs, he knows that he loves working at Bunnings, having an income for the first time, and learning new skills. He would love to pick up more shifts in the new year.

Ticket to Work arranged a photographer to come and take some pictures of Sean at his job. At the end of the photo shoot, Sean offered his contact details to the photographer and said, “If you ever need an assistant, I would love to come and work with you and be your apprentice.”

Sean has a keen willingness and commitment not only to Bunnings but also to taking opportunities in life that come his way. Through working with Angela and the After School Jobs pilot, Sean’s confidence has increased, and he saw an opportunity and went for it. Everyone agrees that Sean has an ‘awesome’ attitude, which will take him far.