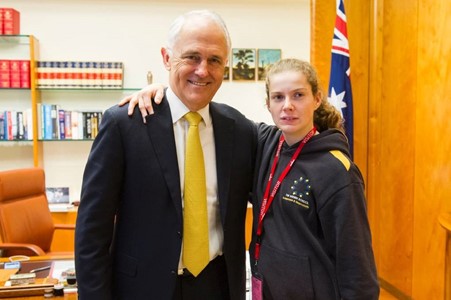 At just 18, Ashleigh has already achieved her dream job – sorting letters and parcels in the mail room at Parliament House.

The teenager, who has autism, is a year 12 student at The Woden School for students with a disability and other special needs. The school was able to negotiate a 10-week work placement for Ashleigh in the mail room, preparing her for the transition ahead once school ends.

Her mum Katrina said it was a dream come true for Ashleigh who had always had fascination with Parliament House, visiting it every second Sunday with a support worker, even long before her placement.

“She loved it that much,” Mrs Edwards said.

“She used go up to the gallery area. She was in there one day and as people were coming into the gallery area, she was welcoming them and then she made them all stand up and sing the national anthem. “For some reason she’s got this real thing for Parliament House.”

Her work experience in the mailroom includes delivering mail to ministers’ offices, including Prime Minister Malcolm Turnbull who took time out this week to personally accept a letter from her.

“We’ve got to get the mail around, that’s very important. No good if it gets lost,” Mr Turnbull told her.

Mrs Edwards said her daughter was not nervous about meeting the man described to her as “the boss of Australia”.

“She’d be more overwhelmed if it was a Wiggle. She loves The Wiggles.”

Mrs Edwards said Ashleigh’s experience in the mailing room was a success story of the National Disability Insurance Scheme.

The NDIS plan made her set out her “high-level” goals.

“And the other goal was for her to live as independently as possible after school.”

The NDIS plan means that Ashleigh is accompanied by a support worker, Laura Greenberg for the 90 minutes every Friday she is in the mailroom.

“She’s so excited on a Friday morning. An hour well before she has to go, she’s like, ‘Can I go yet? Can I go yet?” Mrs Edwards said.

Mrs Edwards said she hoped the work placement might become a permanent arrangement.

“I don’t even care if she doesn’t get paid but for her to do an hour, two hours of work a week, for her, that would be really fulfilling,” she said.

“When she does the work and can do it, she feels a huge sense of pride.”

The Woden School’s special education teacher Rowena Van Ballegooyen, who spent six months organising the placement, said she had seen changes in Ashleigh since she started in the mailroom.

“I think there’s a real sense of achievement that she’s doing a great job.”

“When she’s in there, she’s definitely a lot more calm and together, I guess. She’s not as flustered as she can be sometimes. She goes in there and knows what’s expected of her,” she said.

“She just focuses and really puts her head down.”

Original Article published on The Canberra Times on August 18th 2017.